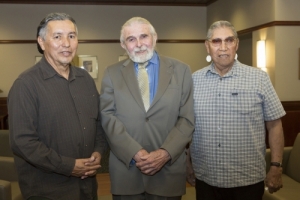 Bernard (Barney) Mergen is a Professor Emeritus of American Studies. He began teaching at George Washington University in 1970 and retired in 2005. Previously he taught at Goteborg University in Sweden, The Community College of Philadelphia, and Grinnell College in Iowa. As a Fulbright Professor he taught at the Free University of Berlin in 1982, and the National University of Mongolia in Ulaanbaatar in 1996. He was departmental chairman for several years in the 1970s and 80s and Senior Editor of American Studies International from 1980 to 2002.

For undergraduates, Mergen taught both semesters of the Introduction to American Studies and upper division courses in American Cinema, environmental history, and at one time or another, oral history, and for several summers, a field program in Mesoamerican Archaeology and History with Professor Robert Humphrey of the Anthropology Department. At the graduate level, Mergen taught the Scope and Methods of American Studies Seminar and Readings in Cultural History. He co-taught Material Aspects of American Civilization with historian Wilcomb Washburn and many curators from the Smithsonian museums of American History, the Air and Space Museum, and the National Portrait Gallery.

In 2014, the Department of American Studies named an annual lecture in honor of Bernard Mergen and his colleague Phyllis Palmer. The event brings visiting American Studies scholars to GW to share their expertise with the campus community.