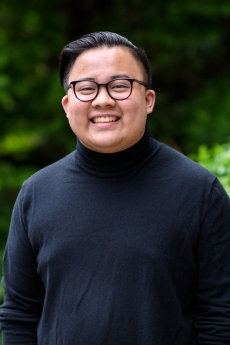 GJ Sevillano is a Ph.D. student in the American Studies department. He received his B.A. in Politics and a certificate in American Studies from Princeton University in June 2019. He is a former Mellon Mays Undergraduate Fellow, an Institute for the Recruitment of Teachers (IRT) associate, and an alumnus of the Leadership Alliance-Mellon Initiative program. He was also one of the recipients of the 2019 Spirit of Princeton Award. His research examines racial consumption primarily through the lenses of Philippine-American history, settler colonialism, and environmental precarity. Moreover, he asks questions of the metaphorical, ideological, and literal American racial palette by consulting spaces of diasporic dining, urban foodways, and “foodie” culture.

In addition to reading for coursework, I have begun exploring my new interests in material culture by examining cookbooks as a way of understanding racial identity formation.

The field of American Studies has been a space of self-discovery, growth, and meaningful learning. I’m just so excited that I get to pursue my passions alongside such amazing faculty, unparalleled proximity and access to the Smithsonian, and other extremely driven students.

Get a monthly unlimited metro pass, its a life saver!

Is there one piece of media that inspired you to pursue the field of American Studies?

Charles Burnett’s 1977 film Killer of Sheep was one of the first texts that inspired me to pursue the subfields of race and ethnic studies within American Studies. Grappling with the quotidian cycles of urban Black life, the film pushes the viewer to do more of the heavy lifting with its unconventional, non-narrative form. I take something new away from the film each time, even having watched it several times now.

If you were tasked with introducing yourself to a person only by recommending to them one film, which would you chose?

Though it has no relation to my own coming of age/coming out story, Call Me by Your Name is a film very close to my heart. It’ll be one of those films that I return to every now and then and learn something new about myself, others, and the world.

Imagine you're up to bat as a Major League Baseball Player. You need a walk-out song. Which would you choose?

"Best Song Ever" by One Direction