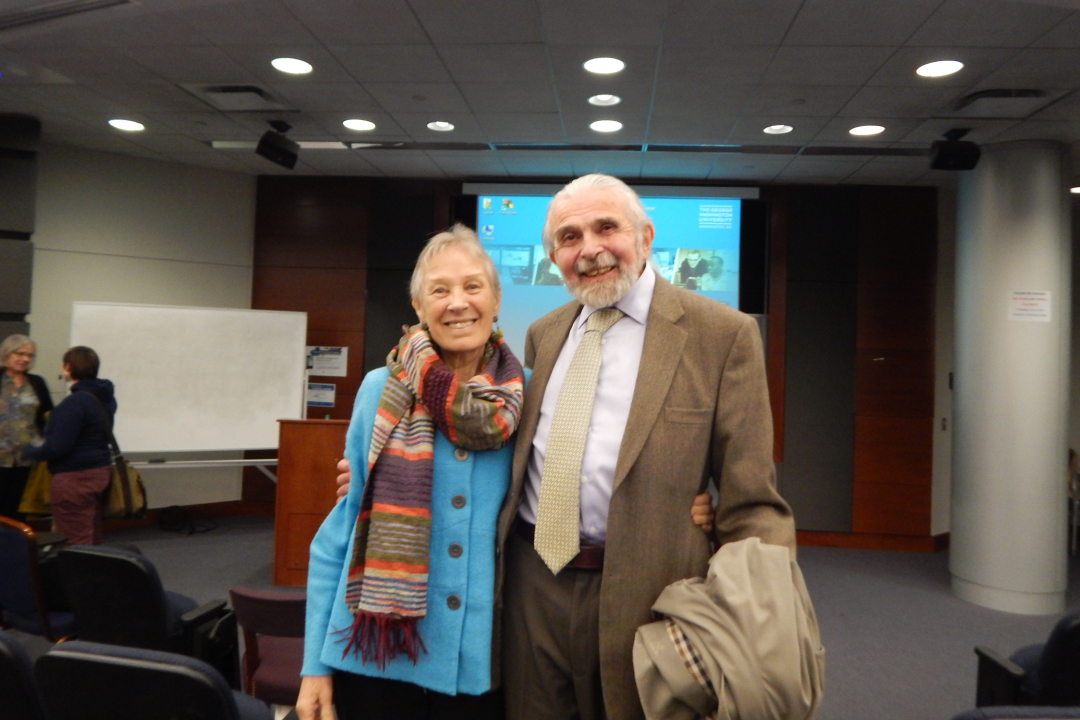 Phyllis Palmer, Professor Emeritus of American Studies and Women’s Studies, died quietly in her home on April 13, 2014, after a year-long battle with cancer. Phyllis was a valued and committed faculty member at GW from 1977 to 2009. She was deeply interested in issues of race, gender, and social justice, both in her writing and her teaching.

Phyllis authored many articles and two books, Domesticity and Dirt: Housewives and Domestic Servants in the United States, 1920-1945 (1990) and Living as Equals: How Some White Americans Created Interracial Connections during the Civil Rights Era (2008). In addition, she was a pioneering member of the Urban Food Task Force at GW.

She also served the university in numerous ways, chairing the steering committee of GW’s Decennial Middle States Accreditation Review in 1995, and acting as interim dean of CCAS in 1995, among other contributions. Most importantly, Phyllis was a mentor and advisor to several generations of students, and a friend and ally to her colleagues. Her energy, generosity of spirit, and commitment to social justice, as well as her honesty and courage in the last year of her life, remain an inspiration to those who knew her.

In 2014, the Department of American Studies named an annual lecture in honor of Phyllis Palmer and her colleague Bernard Mergen. The event brings visiting American Studies scholars to GW to share their expertise with the campus community.

"Professor Palmer taught my Intro to American Studies class during my first semester at GW. I had entered college with every intent of being a Journalism major - but after this class everything changed. Professor Palmer's class was engaging, interesting, and she was so passionate about her teaching. It was Prof. Palmer who inspired me to become an American Studies major. If it wasn't for her, I likely would not be where I am today - my AMST major led me down my chosen career path in marketing. I think about that class every single time I visit an American History museum or exhibit – to this day, she inspired me and changed my life." — Shari Newman Diamond

"Thinking about Phyllis my mind wanders back to 1976 or 77 when I was on the faculty committee charged with interviewing and selecting someone to direct the newly approved program in Women’s Studies. The committee interviewed a number of well-qualified candidates, but Phyllis was the choice of the majority for several reasons. (I remember that she was opposed by one member because she smiled too much.)

The committee was impressed by her emphasis on combining the theoretical foundations of feminism and women’s studies with the practical dimensions of work in private and public sectors. She envisioned an interdisciplinary Women’s Studies MA program that would draw on the university’s strengths in the humanities, social sciences, and public policy. I saw her approach as not only right for the university, but potentially beneficial to the sometimes endangered American Studies Program.
After several years of leading and strengthening Women’s Studies, Phyllis returned to her academic roots in American Studies, bringing the same energy, foresight, and good cheer that had brought her success in Women’s Studies. I learned much from her when we team-taught the Introduction to American Studies course, I came to appreciate the faculty retreats she organized to encourage us to be creative and cooperative, and I eagerly anticipated the fall welcome party for colleagues and graduate students on the roof of her condominium.
Of the many chimerical sounds  you can hear within the crumbling walls of Building P after the last evening seminar has ended, none is more joyful than the echoes of laughter from departmental meetings with Phyllis.  I thank her most for that." —Barney Mergen
"When GW hired me to teach in the Museum Studies Program in 1996, Phyllis was serving as the Acting Dean of CCAS. Those interview days are grueling and I remember how at ease she made me feel, chatting about my American Studies background and my past projects with John Vlach and Howard Gillette. Later she impressed me when she rollerbladed to our retirement party for Marie Malaro! The early friendliness and encouragement Phyllis showed me continued through our time together at GW, including when I became a student in her Women’s Studies class my first fall in the American Studies PhD program. Phyllis was a skilled teacher and I especially admired the collegial and fair tone that she established in that class. I definitely modeled my own teaching after her methods.  Different than any other class I’ve ever taken (or taught), the class---a mix of Women’s Studies and American Studies graduate students, mostly young but also old like me---had a confessional quality to it, with students blurting out all kinds of things like details of their sex lives. When we sometimes veered far off the subject, Phyllis would bring us back to the topic at hand but in a way that indicated she valued whatever we were contributing. Phyllis also gave her students little pieces of herself, talking fondly about her daughter Elizabeth and her culinary aspirations or mentioning “my Marcus,” her deceased but apparently much beloved husband, Marcus Cunliffe. As anyone who ever spoke to her remembers, she had a wonderful way of smiling that crinkled her entire face. That smile illustrated well the great pleasure Phyllis took in her own life, even with the tragedies she faced like the deaths of two husbands, and the vital alive person she remained throughout it." — Kym Rice

"Several years ago Phyllis and I served together on a typically dull university committee. For one of our meetings, we gathered in an empty seminar room in the English department. On the chalkboard, maybe left over from the previous class, was the name of the Polish poet Wislawa Szymborska. The name meant nothing to me, but Phyllis looked up and her face immediately brightened. She began to recite Szymborska’s poem 'Nothing Twice:'

Nothing can ever happen twice.
In consequence, the sorry fact is
that we arrive here improvised
and leave without the chance to practice.

I don’t remember much of anything about that committee meeting, but I have never forgotten those lines. Phyllis lived an improvised life (she knew that there are no other kinds). She was not afraid to get up on stage, whatever the stage, without the chance to practice. The courage, the creativity, and, yes, the occasional zaniness of those improvisations are what I remember most vividly. Nothing can ever happen twice. Phyllis Palmer was a true original, and I’m incredibly grateful to have known her." — Kip Kosek

"What I remember most fondly about Phyllis is her directness. She was outspoken, freely shared her opinion, and told you as it was. She was a great role model for me. We will miss you greatly Phyllis. Rest in peace.” — Dr. Nema Blyden

"Phyllis was a central part of the institution-building efforts that made GW American Studies such a unique and wonderful place to work. I didn't realize until I left GW that many people were traumatized by graduate school and spent half a lifetime recovering. I always joke that I went to grad school with The Walton Family! My dissertation writing group still shares work with one another, and graduate students from my cohort (along with generations before and after mine) still get together for annual reunions at the American Studies Association conference. Phyllis's energy was part of building this vibrant intellectual community, which has been filled with integrity, a commitment to social justice, and mutual respect and support--one that I will always be proud to call home.

As I reflect on what her presence meant to me as a scholar, I also value Phyllis's work in establishing Women's Studies at GWU. I'm now a tenure-track Assistant Professor Women's & Gender Studies at the University of Missouri, and I'm grateful for the ways in which women before me--women like Phyllis!--had to fight to establish resources and carve out space for feminist inquiry and politics on university campuses. It is because of women like Phyllis that I get to have a haven for my gender/sexuality studies scholarship and offer classes that help students develop a feminist/queer consciousness and politics. I never take this opportunity for granted, and Phyllis had a huge role in establishing this presence at GWU.
I'm sending her family and friends love, warmth, and peace." — Julie Elman

"Phyllis was chair of American Studies when I arrived at GW in 1996. I knew immediately that I had landed someplace very special, just from the energy and enthusiasm she emanated. Phyllis’s feminist commitments were obvious in the ways she treated me as the only untenured person, offering advice but also giving me space to do what I thought best. She made it clear that her goal was to support me, to help create an intellectual home for me at GW. I remember telling my friends from graduate school that I had landed in heaven.

What I most loved about Phyllis was the way she shared herself and her stories. Sometimes she and I walked home from campus together, and on those long walks we talked about our lives and our intellectual interests. I was struck then, and to this day, about how much Phyllis’s scholarly inquiries were also personal ones: she cared about the labor of women domestics because she really cared about fairness and a living wage for people; she wrote about race and racism because she was appalled by the racism she had seen growing up and into today. Mostly, she believed we could do better. I have never stopped being amazed by her optimism, her determined sense that people had behaved horribly in many ways in our world, but that it was possible—necessary—to keep a willful hope.
I think that few of us who knew her were entirely surprised by the grace and wisdom she exhibited after her cancer diagnosis in the spring of 2013, but it was amazing, nonetheless, to see her face her illness, and then her death, with that same determination and embrace of the world, even as she—and we—came to realize that the cancer would take her. Over the year, she posted on her CarePages; her posts usually focused on what she was enjoying, be it a night out listening to music with friends, or Elizabeth’s home-cooked meals, the sounds of the birds outside her window or the voice of her granddaughter. She didn’t shrink from the hard news either, including the moment when she decided to stop chemo and turn to hospice care.
Last fall we held the first Mergen-Palmer Distinguished Lecture in American Studies, named after Phyllis and another beloved colleague, Barney Mergen, who had also built our department and mentored generations of students. Phyllis came to the lecture, and at the end of the evening, she spoke briefly and then read from Audre Lorde’s Cancer Diaries. I don’t remember what she read, but I do remember the ways she made us understand that even this journey was one of precious connection and cultivation of the spirit. One of our graduate students later wrote me that he had returned to Lorde after hearing Phyllis that night, and that these sentences resonated for him: “The fact that we are here and that I speak these words is an attempt to break that silence and bridge some of those differences between us, for it is not difference which immobilizes us, but silence. And there are so many silences to be broken.”
Phyllis Palmer was a woman who believed deeply in bridging difference, in speaking truths, and in loving those around her. She was deeply loved and admired in turn. We will miss her greatly." — Melani McAlister