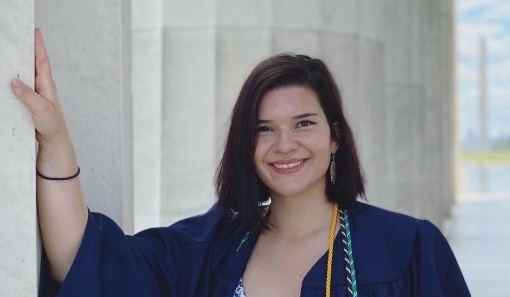 American Studies major Jesslyn Zakes (BA ’20) traveled to the Phil Ochs archive at the Woody Guthrie Center in Tulsa, Oklahoma in March 2020, with support from Columbian College and the Department of American Studies. In the 1966 live recording of his song "Love Me, I'm a Liberal," Phil Ochs speaks to his audience in between a couple of lines and says: “D.A.R., that’s the Dykes of the American Revolution." Zakes’ project examines the meaning of this remark, and explores Ochs, the American Folk Music Revival, and the dyke identity in mid-20th century America.

She shares vignettes from her trip below:

This mural is painted on the side of the Woody Guthrie Center in Tulsa, Oklahoma. Guthrie, an Oklahoma native, was an American singer and songwriter who is considered to be one of the most significant figures in American folk music. His songs expressed a native radicalism that criticized private property, spoke on poverty and rural life, and were anti-fascist. His most famous song, "This Land is Your Land," is painted across the top of the mural, and a sticker shown on his guitar with the famous saying "This Machine Kills Fascists."  These two phrases have not only become associated with Woody Guthrie's life and career, but have influenced various anti-fascist, anti-racists, and anti-capitalist movements throughout the United States.

This image depicts one of Pete Seeger's banjos displayed, at the Woody Guthrie center in Tulsa, Oklahoma, with the inscription, "This machine surrounds hate and forces it to surrender." Seeger, inspired by Woody Guthrie, was one of the most prominent American folk singers and social activists. This banjo's inscription is both a tribute to Guthrie, and a continuation of his message into the second half of the 20th century as Seeger continued to spread his anti-capitalist, anti-racist, and anti-fascist message through folk music.