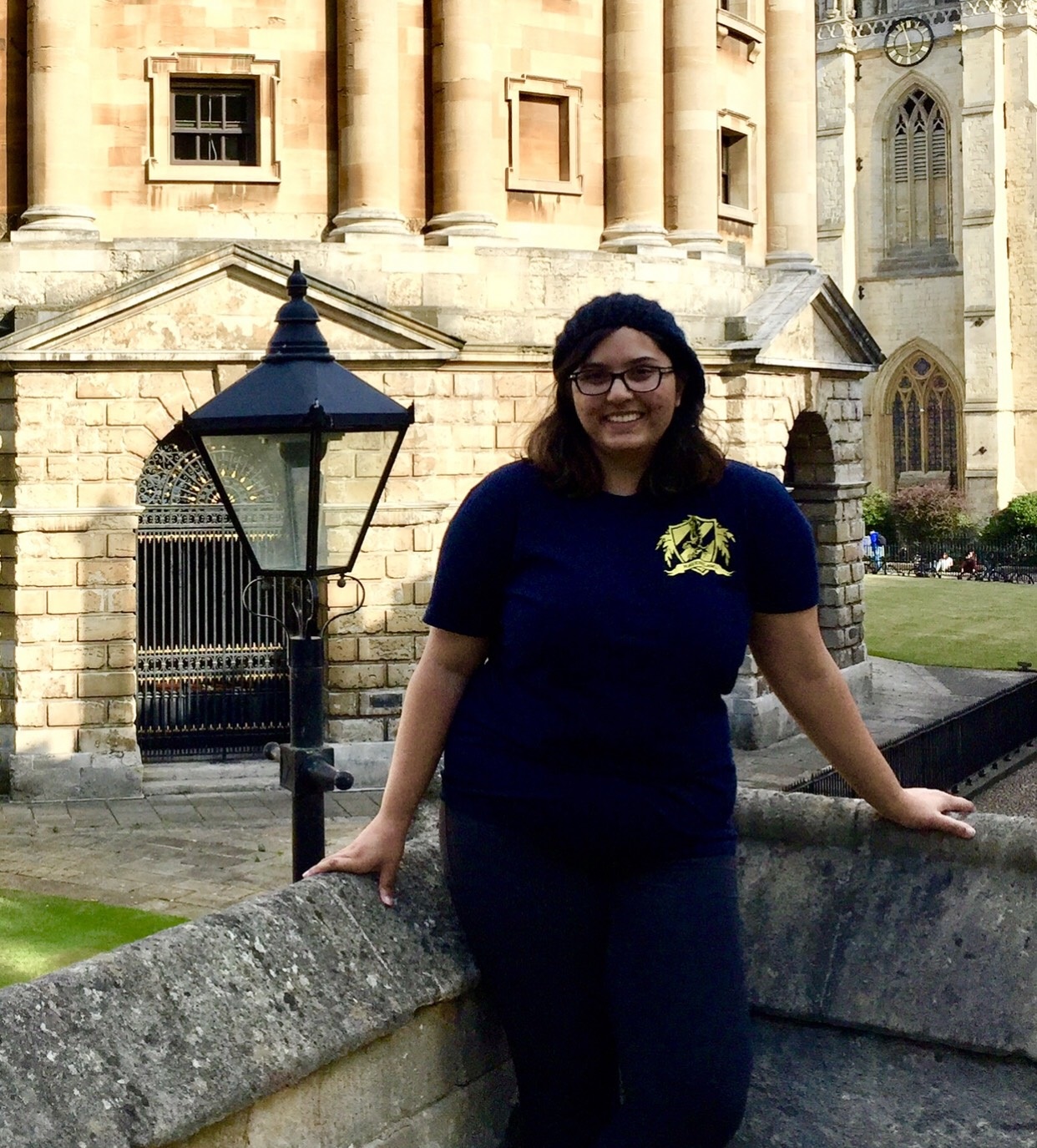 Zaynab Quadri is a PhD student in the American Studies Department. She received her B.A. in History with honors from Northwestern University in 2015, where she was also a Mellon Mays Undergraduate Fellow. Working at the intersection of diplomatic history, critical theory, and cultural studies, her research interests center around domestic and transnational U.S. empire, popular culture, and security politics between the U.S. and the Middle East, vis a vis the "War on Terror" and the colonization of Palestine.

Zaynab recently won an essay contest for her essay on the Vietnam War! Read our interview with her.

Describe the contest and why you were interested in entering it.

The essay contest was held in conjunction with the Waging Peace in Vietnam exhibit, which came to GW’s Elliott School in November 2019. The exhibit features archival material from the GI movement against the Vietnam War, which has not yet been given its proper due in academia or in the public sphere for its role in the broader anti-war movement. There is a book of the same title, Waging Peace in Vietnam, which features essays, photographs, and oral histories; and when the exhibit travels to universities around the country, there are events organized around it, such as panels, film screenings, and receptions. The run at GW, since it was based in DC, had a whole week of events promoting the exhibit. The essay competition, then, asked DC-area students who saw the exhibit to reflect on their experience with it, and the relevance of this history for our present and future. The prize, offered by the organization Veterans for Peace, was $500.

What was the crux of your essay and why did you choose to write it as such?

I felt drawn to write the essay because I had such a moving experience in the events I attended that week. In particular, I was fascinated by the documentary on the GI movement, Sir! No Sir! I have studied the Vietnam War before, as an undergraduate and as a graduate student, but I was surprised and inspired by the tenacity of the veterans who utilized their unique position in American society— having been military personnel on the ground in Vietnam, and thus relatively impervious to the respectability critiques lobbed at the domestic antiwar movement— to protest loudly and persistently against the war. They took great personal risk to expose what they saw. It was a great slice of social movement history. However, in reflecting on the violence of the war, as it was covered especially in the panel discussions at the end of the week, I also felt a lot of grief, because ultimately Vietnam and the Vietnamese people were poisoned, bombed, and torn apart as a result of American policy, and protest always necessarily comes afterwards, when the damage is already done and often isn’t collectively mourned enough. Further, my dissertation is focused on the Iraq and Afghanistan wars, and so many of the same dynamics in the Vietnam War era would come into play again just a generation later— unscrupulous lies from public officials, environmental devastation, families and whole societies destroyed. I had recently finished defending my dissertation prospectus when I attended the exhibit, so I found the essay competition a cathartic space to reflect on the awful violence of US foreign policy, the bitterness I felt in excavating its bloody legacy, and my own positionality as simultaneously an American, an immigrant, a child of the post-9/11 era, and a scholar working on the Iraq and Afghanistan wars.

Does this relate to your research in the Ph.D. program? If so, how?

My dissertation project is about private military contractors (PMCs) as figures of American imperial crisis, which help us think about democracy, security, and climate change in the twenty-first century. When I went to the exhibit, I was in the preliminary stages of working on my first dissertation chapter, which uses Marvel films and comic books to consider the ways in which the specter of the Vietnam War inflects more contemporary (pop) cultural discourse around PMCs in Iraq and Afghanistan. I was thus interested in the Vietnam antiwar movement, and found the exhibit’s focus on the GI movement really helpful in conceptualizing the tension between the soldier and the PMC, both of whom operate in the field of war but who are perceived so differently and are subject to such different rules of conduct. The exhibit was also helpful to think about the broader antiwar movement, which along with the civil rights movement forced a genuine public reckoning with American institutions of power and the violence they structurally perpetrate. These issues continue to be salient, and I benefited greatly from taking a closer look at the source of the echoes I’m tracking for this chapter.

Has there been a watershed moment, so to speak, during your time in American Studies that has informed your research? A specific course, conversations with a specific faculty member, a certain book or paper you've read?

I wouldn’t say there has been a watershed as much as there has been a general, chaotic, perpetually-moving journey through the often choppy waters of intellectual inquiry— only to look up once in a while, and realize how far and wide I have been swimming since I started the program. I’m now in my fourth year, and I never could have predicted my project as it exists now! That is the spontaneity and the joy of research. I wrote a paper about the Vietnam War and domino theory in a course I took my first year. I wrote a paper about PMCs and neoliberalism in a course I took my second year. I have also done work on Israel/Palestine in grad school, but that line of inquiry didn’t make it to the dissertation in its current form. My brain is a jumble of sparking wire after every meeting with my committee advisers. I have filled a couple of notebooks already, just outlining and brainstorming and note-taking for this first chapter. No doubt I will have frustrations and epiphanies anew while I write. There’s no order or method to this madness, or to the things that have wound up mattering the most to me. I’m just trying to stay open to new experiences and the unexpected places they take me!

What's the next step for you, or the next big thing on your plate, in American Studies?

Currently I am working on my first chapter draft, which I hope to then refine and also turn into an article. I’m also taking an archive trip over spring break to Philadelphia to see the papers of an organization, NARMIC, that did research on military contractors during the Vietnam War. Dissertation work can be complicated, but I’m trying to stay accountable to the deadlines I’ve set myself, and also just enjoy the process of researching and writing— as much as one can when thinking about war crimes, anyway. It feels like meaningful work, and I’m grateful I get to do it.

What are you studying now?

My goal overall in graduate school is to write on American empire, in particular American foreign policy in the Middle East, so right now I'm taking classes on Middle Eastern history and theories of capitalism and imperialism. I knew very little about theory coming into GW, so flexing new intellectual muscles has been both challenging and exciting.

What attracted you to GW to further your studies?

I was initially interested in GW because I was interested in the work of Melani McAlister, who is now my primary adviser. I read Epic Encounters in college and I couldn't get it out of my head. I would have come to GW just for Melani, but it turned out that the American Studies department is so vibrant and wide-ranging in its research interests; when I came to visit, and learned more about the professors doing work here, it really impressed upon me that GW was the perfect fit, intellectually.

What advice would you give to aspiring graduate students in American Studies?

I'm basically still an aspiring graduate student myself right now; I've only been here a couple of months and everything still feels so new! But if I could give one piece of advice to someone going through the application cycle at the moment, I would say there's no substitute for talking to professors one on one and visiting the campus if possible. People are much cooler than they seem on their department bios, which are meant to sound more like resumes. I was a history major in college, and I never thought I'd be in an American Studies department, but it was meeting the people in the department that convinced me to make the switch.\

What's your favorite place to hang out in DC?

I still haven't seen very much of D.C., with moving and then settling into the pace of graduate school. But campus-wise, one of my favorite things to do is get the kofte special from the Tasty Kebab food truck on Wednesdays and eat in the sunshine on one of the benches in Kogan Plaza. One thing I do want to do though, maybe in the spring when the threat of winter has subsided, is to take my readings up to the Lincoln Memorial and read on the steps with a little picnic. The aesthetic of studying American empire in the very memorialized center of it tickles my imagination.

What's been your favorite American Studies moment this semester?

An interesting moment I had in this department came very early into the semester, when a scholar I'd applied to work with from another institution came to GW to do a talk about his new book. Turns out, he's friends with my adviser, we got to chat a little bit, and then he signed a copy of the book for me. It was just amusing to me, getting a concrete sense of how small academia really is, and how everyone knows everyone. I felt honored and excited all over again, to become a part of the academic community myself.